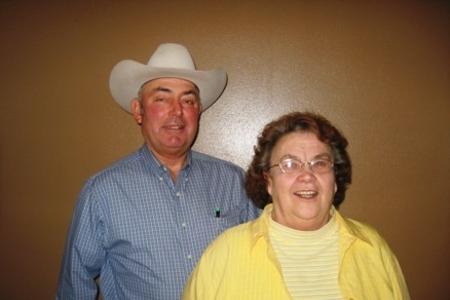 Gilbert Lutter attended the Western College of Auctioneering in Billings, Montana in the fall of 1957 at the age of 17.  Gilbert started selling farm sales and household sales the following year, as well as working at the livestock auctions.  His first job was at a livestock auction in Cresbard, SD and later was employed at the Redfield Livestock Auction, Lokens Watertown Sales, and Hub City Livestock in Aberdeen, SD.  Gilbert was married to Zelda Yada in 1961.  They farmed, raised cattle on a farm near Tulare, SD.  Gilbert continued to work at the livestock auctions.  In 1969 they purchased the Redfield Livestock Auction and operated that business until the spring of 2008.  Just 6 months short of 40 years.  Zelda was clerk and office manager throughout the years.  All the while they were actively involved in selling farm sales, household sales, antiques sales and real estate auctions.  Gilbert holds an auctioneer real estate license $76, so was one of the earlier auctioneers licensed in the state of South Dakota.

​     Gilbert is the son of the late John Lutter, who was a very well known breeder of registered Belgian horses.  Gilber and Zelda have been actively involved in the Quarter Horse business and still have a small band of mares and a stallion and Gilbert continues to show a few cutting horses.

The Lutter Auction business is operated under the name of Gilbert Lutter and Associates.  The business is comprised of Gilbert  & Zelda Lutter, son Joe and his wife Alisa, and daughter Barb and her husband Bryan Lenocker.

Joe Lutter attended Western College of Auctioneering in Billings, Montana in June 1981.  At the time he joined Gilbert Lutter and Associates as an auctioneer and also helps with lining up auctions.  Through the years Joe has conducted and sold all types of auctions in many different states.  He has worked several major horses sales throughout the Midwest.  Joe holds an Auctioneer Real Estate License #10095 and a Real Estate Broker license.

Joe married Alisa McGraw in 1997.  They have five children.  They raise Belgian Draft Horses and Quarter horses and feed a few cattle on their ranch South of Zell.  In 2007 Joe and Alisa purchased Williams Realty and later change the name to Lutter Realty where Joe is the Responsible Broker and Alisa is a Broker Associate/Office Manager.  Alisa also helps with the clerking duties at the auctions.  Joe and Alisa are active in the community and enjoy the auction and real estate businesses.

Barb is the youngest of Gilbert & Zelda Lutter's children.  She married Bryan Lenocker in the summer of 1987.  Shortly after Bryan attended Western College of Auctioneering in Billings, Montana and stared helping his in-laws at the various sales in the area.  Barb helps with the dlerking duties.

Bryan and Barb have two children and live in Tulare, SD.  They are actively involved in the showing and training cutting horses.

Barb is an Insurance Agent with Heartland Financial Services, in Tulare and Redfield.  Bryan works full time as an agronomy Assistant at Wilbur Ellis in Tulare.

"Selling the Earth and Everything on it."